As a former sales professional, I’ve attended my fair share of conferences. It’s usually ended up being a game of networking roulette—working the room hoping you’ll bump into someone with whom you have synergy. It’s a professional gamble. Sure you’ve made connections; but were they the most strategic, or the most convenient?

Today, I’m heading to Boston to attend the Inbound Marketing Summit and it’s the first time I’ve used twitter before attending a conference. I have to say, I’m impressed with the potential. Here are some ways I’ve used twitter as a tool to make the most of my meetings for the next 3 days.

1. Follow the hashtag.
If you’re organizing a conference, hashtaging is a must. It allows attendees to mark tweets as relevant to you. Without it, you’re missing out on a big portion of the conversation. Attendees, use a twitter aggregator such as Tweetdeck (desktop) or Hootsuite (web app) to easily follow the conversation and see who else will be there. The hashtag for the Inbound Marketing Summit is #ims09.

2. Are you on the list?
Earlier this month, TweepML launched a Twitter Group Service, allowing users to create their own lists.  I found this tool indispensible, as I was able to add and follow over 50 other people who are attending the conference with just one click! To get on the list, simply contact the administrator of the list and ask. (“Pretty please with a cherry on top?”)

3. Reach out and tweet someone (pre-networking).
Once you’ve made some connections, it’s time to use them! Start by looking at the bios of your new contacts. Is there anything you have in common? If so, use twitter just like you would if you were in the room. For example, I found out that @InnovateMarCom is another avid karaoke fan. With just a couple tweets, we struck up a conversation. Now, when we meet in person, the connection will be much richer (even if Boston lacks a karaoke scene). 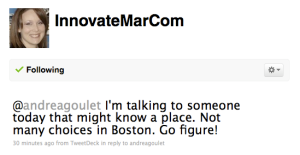 Even if we can't plan a karaoke outing, chances are Nichole and I will have a great conversation.

I’ll be arriving in Boston around 7pm tonight. Looking forward to a great conference and meeting all these wonderful people in real life. Safe travels everyone!